Cops Decorate Christmas Tree with Mugshots. Is it Funny? 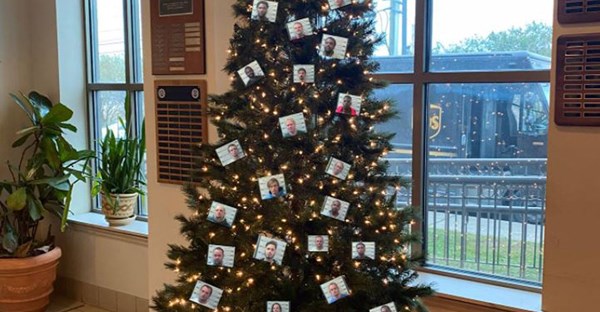 The Mobile, Alabama Sheriff’s department is the gift that keeps on giving.  Hot on the heels of last year’s controversy where they made a quilt out of signs confiscated from homeless citizens, the department posted on their Facebook page a picture of a Christmas tree decorated with mugshots of criminals they’ve arrested over the past year.

In what is either spectacular trolling or exceptional ignorance, the department’s now deleted post reads:

"We have decorated our Tree with THUGSHOTS to show how many Thugs we have taken off the streets of Mobile this year! We could not have done it without our faithful followers!"

While undoubtedly the red half of America is doubled over with laughter and the blue half has found a reason to hate cops even more, it all begs the question, is this funny or terrible?

The Right Loves It

If you’re Republican, this is undeniably funny.  Not because the cops say they need Facebook followers in order to make arrests.  Not because the department learned absolutely nothing from their post last year dunking on homeless people.  Not even because of how stereotypically cop-like it sounds.

It’s funny to Republicans because it made Democrats lose their minds.  Simple as that.  In America these days, pissing off the other side has replaced baseball as the national pastime.

With that in mind though, rather than just immediately laughing at them, it’s always worth asking if the other side is justified in their anger.  Entertaining as it is to watch people you don’t like go ballistic, it often leads us as a society to overlook a lot of stuff we normally wouldn’t tolerate.

The Dems Hate It

A police department publicly humiliating criminals on Facebook is a bad look.  It’s the digital equivalent of locking someone in a stockade and letting the townsfolk throw rotten fruit at them.  The whole concept is has been widely considered primitive and inhumane for generations, and for good reason.

As the ACLU said in regard to the thugshot tree:

“The majority of people arrested for crimes struggle with mental illness and substance use issues. They need the community’s assistance and care, not open scorn from leaders."

They have a point.  Typically, people with mental illness and drug problems get sympathy from society.  However, the minute they do something illegal that all goes away.

Many, not all, but many people in law enforcement tend to think of the world in terms of good guys and bad guys.  Bad guys are incapable of rehabilitation and thus don’t deserve sympathy, just punishment.

That type of good vs evil mentality has ended up pitting cops against their fellow citizens and is something that even Trump has sought to reform.  However, the sheriffs in Mobile don’t really care about all that. They just see a bad guy and think nothing about blowing him up on the internet.

And therein lies the humor!!

Serious stuff aside, these cops are hilarious.  Hilarious because they have learned absolutely nothing.  After all the protests this year, after all the controversy, after a similar (some would say worse) post they made last year, these guys still put ridiculous stuff online that makes them look like a laughingstock. And if you can’t laugh at inept public servants putting their foot in their mouth, then what can you laugh at?

It’s pretty clear they had no idea this would blow up the way it did.  Otherwise, they wouldn’t have deleted it.  You can almost even see them talking amongst themselves saying “I don’t get it, to me that’s just funny!”.

So, sorry to the people of Mobile that they have to rely on these guys to police them, but god bless whoever runs their social media.  I, for one, plan on following every account these guys have in the hopes of running into more gold in the future!

Should the cops have deleted this image or should they have doubled down and left it up?