The Case for One World Government 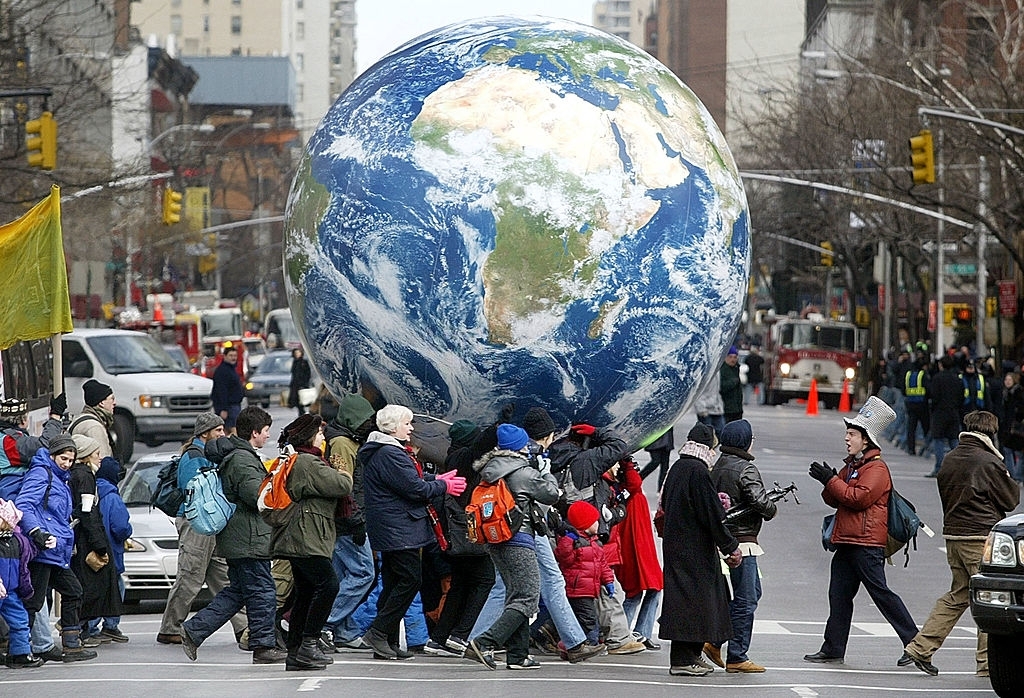 There are almost 200 countries in the world

Their sizes are as arbitrary as their reasons for existing.  Regardless, they possess a unique ability to organize people and resources that has produced some truly inspiring results (think: moon landing).

Unfortunately, their competing interests also tend to bring death and destruction wherever they go.  Yet, despite the grandest aspirations of Marx, they remain a necessity in this world.

So all this begs the question, is it possible to replace 200 nations with just one?  And if you could, would it be worth it?

To find the answer though, it helps to know what a nation is good for in the first place.

Nation states as we understand them first developed to protect and promote the interests of individual tribes.  For example, France came into existence as the formal governing entity of the Frankish people.

Like everywhere else, this entity was granted exclusive rights to legislation, taxation, foreign policy, and violence.  These tools are meant to be used in a way that creates an environment in which a society can succeed and grow. And in the case of France, the results were tremendous.  The French invented human rights, have a massive aerospace industry, and also produce the best wine and cheese in the world.

The strategy is not unique to France.  Rather, it is the way every country operates.  Examples of it's success include sending a man to the moon (USA), pulling 1 billion people out of poverty (China), or creating the World Wide Web (UK).

However, all this benefit comes at a cost.

The biggest problem with having individual nations is that they all have competing interests.  Unfortunately for humanity, those interests often end up being excuses for all sorts of terrible things.

War, conquest, imperialism, lying, cheating, stealing, dropping atomic bombs, burning people with napalm, or using mustard gas.  The things that people will do to each other in the name of national interest is limitless.  Indeed, the Cold War almost ended life on Earth because neither the U.S. nor USSR was willing to cede any power to the other.

Leaders like to say they inflict all this misery in order to "spread democracy” or to liberate oppressed peoples, as if they’re some kind of humanitarians.  But the real reason is that they’re playing a game.  The goal is to gain power and there aren’t any rules.  Unfortunately, every country has to play the game.  Otherwise, they risk being exploited themselves.

Meanwhile, the game also brings misery and destruction wherever it goes.  Imperialism enslaves weak nations.  The lust for resources justifies all manner of behavior.  And warfare doesn't even bring real benefit to citizens on the winning side.

So bearing all this in mind, it’s worth exploring if we could fuse the world into a single nation and do away with these competing national interests.

While uniting the whole world under one flag might sound a bit far-fetched, considering our wide-ranging differences, there certainly seems to be more connecting us than separating us.

Traditionally, nations were ethnically homogeneous entities that shared a common religion, language, customs, etc.  However, modern nations are almost the polar opposite.

South Africa has 11 official languages.  The United States has dozens of religious groups.  Benin, a small African country, has 42 ethnic groups.  Indeed, the only thing that truly unites most countries is their values, and in the 21st century there is wide agreement on what they should be.

Free speech, civil liberties, and democracy are written into the constitutions of most nations.  While once thought of as exclusively western, the rise of the internet has ensured that most of the world’s citizens now share those same values.  Indeed, most citizens around the world have very similar values that they want to see from their governments.

At this point, the biggest obstacle keeping people from wanting to unite is tradition.  They've spent so much time separate that it's hard to imagine being one nation.  Yet, despite that sentiment, it’s hard to say that the needs, hopes, and dreams of a Belgian are much different than those of an Indonesian or a Chilean.

Granted, there are practical issues associated with incorporating Burkina Faso into the same nation as Canada.  However, East Germany was significantly underdeveloped before reunification, and now Germany is the strongest economy in Europe.  So while there would be many hurdles to overcome, incorporating the Global South into the developed world is certainly not impossible.

Meanwhile, there’s everything to be gained.

Have your Cake and Eat it Too

In a one-nation world, nearly every problem associated with the competing interests of individual nations would be eradicated.

War would be unnecessary. Exploitation of poor nations would be legally impossible.  Resources would no longer be weaponized or coveted.  And imperialism itself would be a thing of the past.

Meanwhile, the focus of government could shift from competing with others to fully serving its citizens. Defense budgets would (nearly) disappear.  People and resources would move freely without artificial barriers separating them.  Global cooperation would finally be possible for issues like climate change.  Moreover, the human race would be able to collaborate on an unprecedented level and work to achieve even greater things in the future.

It seems like such a no-brainer that it makes you wonder why more people don’t advocate for this.

The countries with the most money and power have the most to lose from a united world.  Currently, nations like the U.S. are in a privileged position relative to everyone else.  They bully their way to cheap resources, turn a blind eye to the slave labor that makes their goods, and create artificial barriers to protect their own industries from true competition.

So of course those countries demonize the idea of a world government.  They call it some kind of Orwellian nightmare where corruption reigns supreme and citizens have no rights.  They say that if it happened there would be no one there to help.

Yet, how far is that from current reality?  The United States for example has legalized corruption for public officials and continuously erodes its citizens’ rights.  Meanwhile, there’s no other country willing to do anything about it.  Ultimately, nations change from within anyway.  So should the government of a world nation push too hard, it would find resistance from every man woman and child on the planet.

As such, there’s already not much to lose with a single-nation world and quite a bit to gain.  Granted, the hurdles would be huge and there would be big growing pains, but the thought of a better tomorrow makes it worth exploring what we can do today to move us closer.

Are the huge costs worth keeping the world as it is?